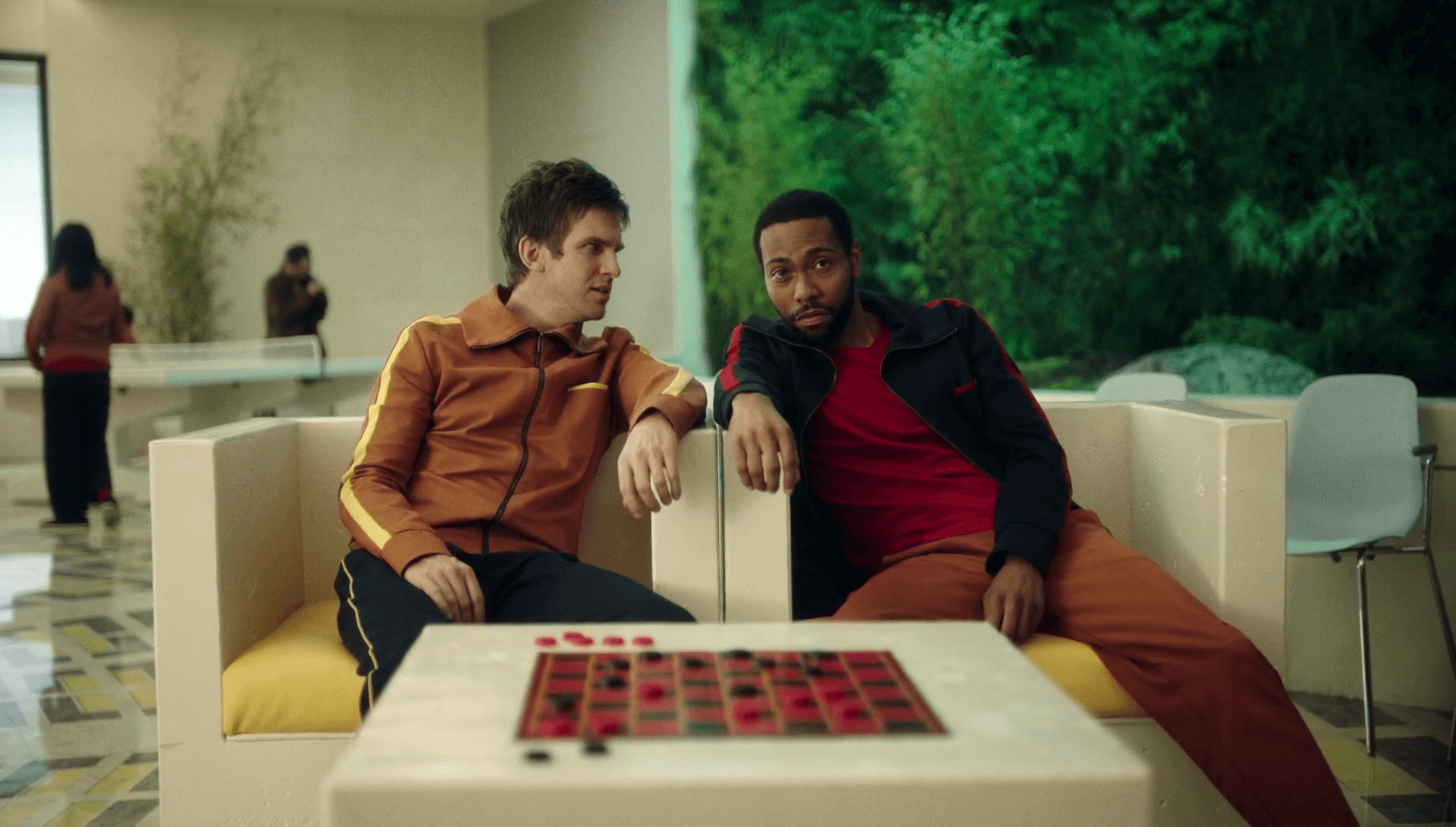 Legion: Can’t See The Wood From The Trees

I love the Legion TV series by FOX. For those unaware the show is based on a Marvel Comic Character: Legion. Legion, a part of the X-Men Franchise,  is one of the most powerful characters in the whole Marvel Comic Universe.  An Omega Level Mutant. This article  Its appeal to me is the particular use of set design.

The wallpaper perhaps signalling misinformation and untruth at play. The images above, taken from “Chapter 6”, show discussions taking place where “The Devil with Yellow Eyes” (under the guise of Dr. Busker) attempts to convince the “patients” of different delusions to varying degrees of success. This particular setting resonates with lead character David as he has been a resident at ClockWorks previously (“Chapter 1”). It resonates with the viewer because we have also seen ClockWorks before (“Chapter 1”); but it has since been revealed that David’s previous schizophrenic diagnosis was false/incorrect. Viewers can now observe the parallels and differences since our last visit and draw conclusions.

ClockWorks Psychiatric Hospital is not the only place in the series where David has received psychiatric sessions. Once set free by the “good” mutants at Summerland Institute, he is advised by its leader Melanie to have sessions in “Chapter 2”. The effectiveness and benefit to David’s overall mental state is conveyed to viewers before the session even begins. Through the cinematography, the difference between Summerland and Clockwork sessions is that of transparency (glass instead of semi-opaque wallpaper), truth (real trees instead of painted), family (group sessions rather than one-on-one) and harsh realities (angular furniture and metal architecture over soft fabrics).

There seems to be an ongoing theme of real and fake foliage that really comes to a head in Chapter 6. Most prominent in Melanie’s development in this chapter,we her repeatedly holding or tending to fake plants as if they are real. We even see her water a model grave. Not only does the model grave grow fake flowers, but as Melanie waters, we hear real rain sound effects. It appears as though fake flowers are a metaphor for “The Devil with Yellow Eyes” planting false memories and ideas. In Melanie’s case: the death of her husbands death. We see Melanie watering a clearly fake daisy. “The Devil with Yellow Eyes” is making Melanie nurture this false idea.

Throughout “Chapter 6” we see a lot of particular cinematography in relation to fake plants on or near heads of other characters. This is in relation to final “The Devil with Yellow Eyes” scene in “Chapter 6” where it explains the finer points of its powers. Essentially of a neural, parasitic nature.

Legion has managed to work in some fantastic real foliage displays indoors. Not only a great cinematic and ascetic choice, but in many scenes within ClockWorks, they become the focal point. Realistically speaking, greens and firs this luscious are not possible in indoor settings. They are real plants (ignoring CGI), but the settings are false or incorrect. These scenes help to illustrate, characters mental state in regards to the sub-conscious battle of distinguishing real and “planted” ideas and memories.

Viewing Melanie’s progression in “Chapter 6” using the images above. We see the idea of husbands’ death being seeded and nurtured. In the lunch scene, Melanie is feeding food to an imaginary person, her husband, against a wall of green foliage. Melanie is just on the edge of the green foliage, the imaginary husband she is feeding, meanwhile [would be] in it. Leading viewers to believe at this stage, her sub-conscious is battling the idea. Truth is, he exists, but she isn’t 100% convinced anymore. She is starting to hallucinate incorrect memories. L

ater when we see Melanie watering plants, the camera pans out,  Melanie is smiling against the backdrop of real foliage. Truth is, she’s still convinced that her husband is alive. Who smiles at a grave? Her subconscious has realized what is happening. Her husband presents himself in the next scene.

We see a very particular use of the foliage and cinematography, with the conversation between David and Ptonomy. It is split halfway down the screen. This conversation in “Chapter 6” mirrors a conversation, that viewers know as a false memory in “Chapter 1” . This time a checkers game is in shot.

The conversation, while odd, is very telling considering Ptonomy reveals his travelling through memory habit (regularly watching his mother die) in his session. Reminicent of the addicts in the film Inception. Hypothetically considering Ptonomy is on the side of foliage/truth

David: “I don’t” (considering David has a false memory of having a pet dog… this seems odd)

David: “I’m saying who was he before this?”

Ptonomy: “There is no before once the sickness starts…” (true). “you see thats the lie…..” (also true)

Sickness in this setting is a double entendre for symptoms of being in the Astral Plane in this episode (memory loss like Melanie’s husband) and being unsure of reality in general. Ptonomy then calls out the menu they have later verbatim. Ptonomy’s sub conscious knows what is going on. He is shrouded in green foliage. The only problem is, for a mind that travels through memories like time…its hard to keep track or even care what reality he is in. This is alluded to in Ptonomy’s psych session As he says in this scene, there is no magic move to get him normal and back to reality. (true)

Once this interaction Syd asks about the door, David (the hypothetical liar in this scene) looks very shifty with a non-committal answer as he leans closer to Ptonomy’s side. This is just before “The Devil with Yellow Eyes” interrupts as Dr. Busker and drags him away from the green completely.

So what does this all mean; besides the cinematography of this show being of a high class? The beauty of madness, with more answers become even more questions.

If potted plants and false woodland [wallpaper] are metaphors for false memories/ideas; and real trees indicate truth. What do pictures of real trees and woodland represent?

If the large green foliage in indoor settings represent subconscious conflict with the Astral Plane, was Clockworks even real in “Chapter 1”?

What is the significance of a non-descriptive man, hiding in the large green foliage in “Chapter 1 and 6”? In “Chapter 6” he is even carrying a potted plant?

With clarity becomes more disillusion. We as viewers are only half-a-step ahead of a main character that has little understanding of what is going on. So even we the viewer cannot distinguish the wood from the trees.