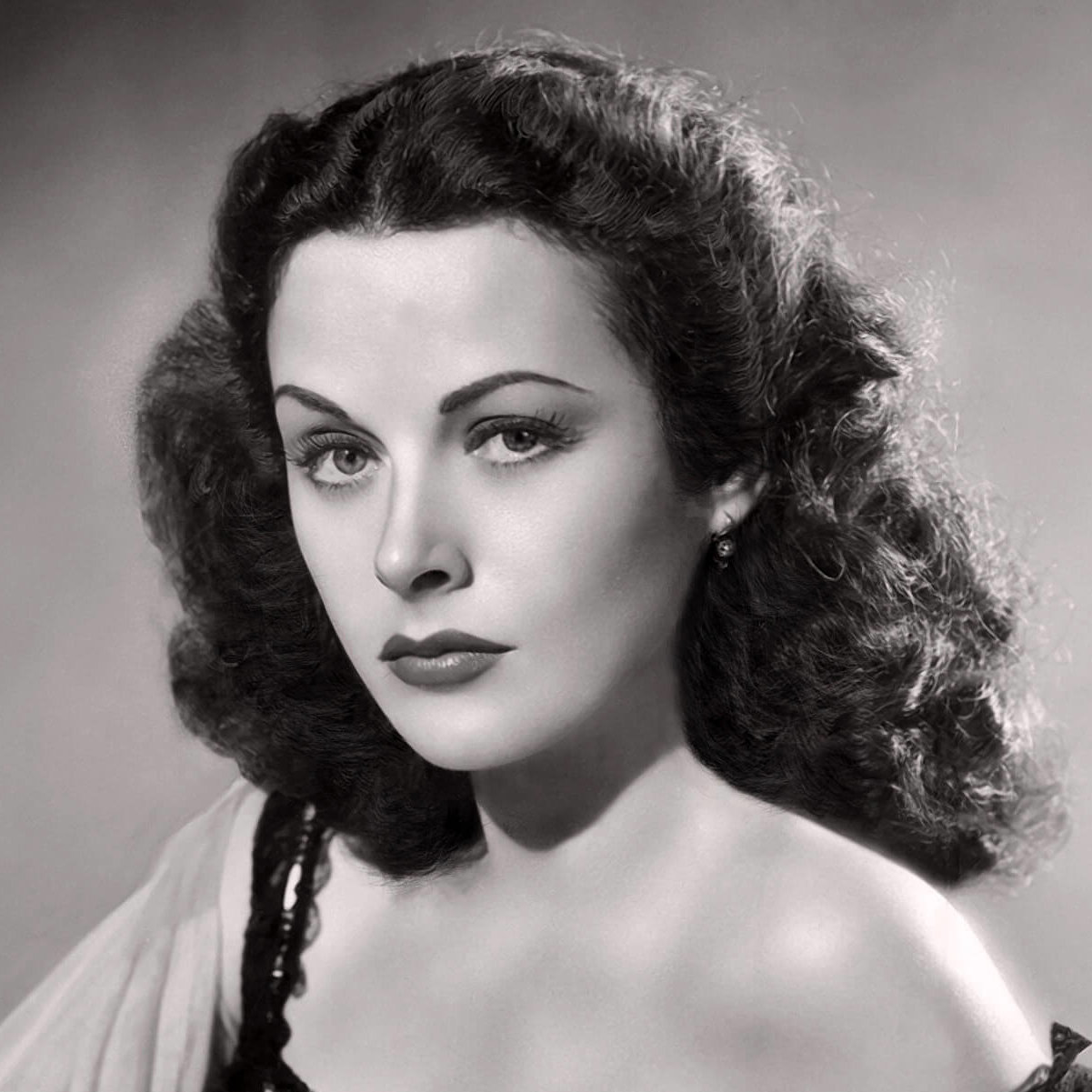 Any girl can be glamorous. All you have to do is stand still and look stupid. – Hedy Lammar 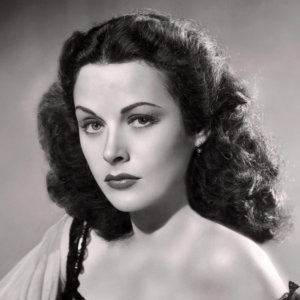 She escaped from the Nazi’s, rubbed shoulders with the military elite, dominated the silver screen, had the first orgasm on film, spoke out about rampant misogyny in the industry, patented technology that is still implemented to this day. A driven women, a math prodigy, science nerd. To even compliment her god given beauty at this point would be a detriment to her life’s achievements.

The ladder of success in Hollywood is usually agent, actor, director, producer, leading man. And you are a star if you sleep with them in that order. Crude but true.

When Lamarr applied for the lead role in the film “Ecstasy”, she had little experience nor understood the planned filming. Anxious for the job, she signed the contract without reading it. When, during an outdoor scene, the director told her to disrobe, she protested and threatened to quit. But he said that if she refused she would have to pay for the cost of all the scenes already filmed. To calm her, the director said they were using “long shots” in any case, and no intimate details would be visible. At the preview in Prague, sitting next to the director, when she saw the numerous close-ups produced with telephoto lenses, she screamed at him for tricking her. She left the theater in tears, worried about her parents’ reaction and the possibility of ruining her budding career.

Fortunately this wasn’t the case.  Hedy Lemarr would eventually end her career grossing an average box office taking of around $3,500,000 across 30 films. Incorporating rate of inflation this is $61,636,762.59 in 2017. By Modern film standards this makes her more successful than the likes of Julia Roberts, Jennifer Aniston, Christian Bale, Drew Barrymore; who all have appeared in a similar number of films. Hedy was one of the biggest stars of her era.

Unfortunately for Hedy, the film she was blackmailed into completing, Extacy, became an international and controversial success. Initially banned in the USA; personally banned by Hitler. Even Mussolini reportedly refused to relinquish his copy despite financial offers from Hedy’s first husband, Fritz Mandl. Fritz, a misogynistic ammunition manufacturer and Nazi sympathizer, attempted to buy back copies of the film using his connections, resources and wealth generated in an era of World Wars. To the pain of Hedy and Fritz, she had gained the label of the “Extacy Girl”

I knew very soon that I could never be an actress while I was [Fritz’s] wife…. He was the absolute monarch in his marriage…. I was like a doll. I was like a thing, some object of art which had to be guarded—and imprisoned—having no mind, no life of its own

Hedy, at the time, was essentially held captive in an Austrian Castle while her husband pandered to and hosted key Nazi and fascist figures. A trophy wife attending and hosting countless military related events for her husband. Her marriage to Fritz became an untenable situation for her. Bringing credence to the plot of the film “The Sound of Music”; Hedy needed to escape. She disappeared in the middle of the night. Reports vary but some say she drugged the maid, stole all of the jewelry, avoided security and fled to Paris under the maid’s identity.

On her travels, Hedy eventually found her way to London , crossing paths with Louis B. Mayer talent scouting for actresses.  Louis B. Mayer being the owner of MGM Studios, the largest movie studio at the time. Hedy well aware of her own worth, declined Louis’ initial offer. Instead she spent money following Louis B. Mayer and his wife back to America to negotiate a better contract. After impressing them both, Hedwig Kiesler was no more, Hedy Lemarr “The World’s Most Beautiful Woman” was born.

Both Louis B. Mayer and Hedy shared the desire to eradicate Hedy’s notoriety as “Ecstasy Girl” and establish her as a respected actress. The Box Office stats mentioned earlier show they far surpassed their initial goals; but it was not an entirely smooth ride. Hedy, raised a scholar of science and chess by her father, often spoke of her frustration with certain men on a professional level.

Hedy Lemarr achieved international fame as a Hollywood movie star. But she still was not satisfied. Born to Bank Director and Pianist,  an avid chess player and a lover of science, Hedy was an ideas woman. In her trailer between takes, and staying up all night at home, she practiced her favorite hobby: inventing. Past-times include her failed experiments (effervescent cola tablets) and her successes, including streamlining her lover Howard Hughes’s racing aeroplane. “I don’t have to work on ideas,” she says. “They come naturally.”

Films have a certain place in a certain time period. Technology is forever.

From the earliest age, over time, Hedy Lamarr had many relationships. But it was not until George Antheil, that her passion for inventing was shared.  With America eventually joining Wolrd War II, Lamar wished to challenge the same Nazi movement her ex-husband (Fritz Mandl) significantly contributed to. Somewhat ironically, Hedy had become knowledgeable on warfare technology from her first marriage, entertaining the Nazi elite.  Unlike World War I, World War II was a lot more reliant in technological warfare and the environment gave birth to many inventions. Computers, cryptography, radars to name a few, this was an era of intelligence but more importantly counter intelligence.

Hedy and George developed a device that would prevent torpedoes from being “hacked” mid-flight. The issue: due to innovation, radio signals could easily be infiltrated from both Axis and Nazi powers. For a time, some missiles were rendered useless. Using a Piano Rolls (automatic piano players) as inspiration, the idea was for bases to maintain communication with the torpedoes by both sender and receiver “hopping” among various predetermined frequencies.  Similar to how piano rolls “hop” from note to note, this would prevent enemies from seizing one frequency and taking control of said torpedo. Even if they managed to for a split second, the frequency would change anyway.

US Patent No. 2,292,387  was eventually granted in 1942. Adoption within World War II was pretty late, due to initial skepticism. How could an avant garde pianist and Hollywood Actress possibly contribute to America’s war efforts? Their innovation was not widely recognized at the time, and really not until the modern era. 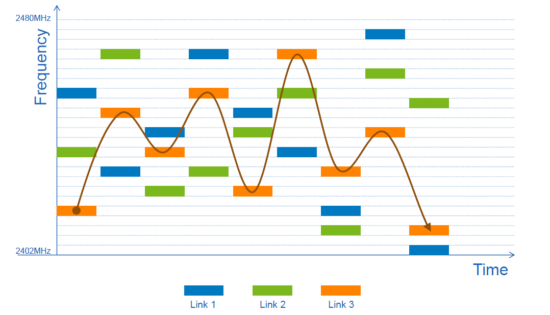 Today: The patent is still being referred to today, referenced over 60 times for other patents; the latest being in February 2017. The key, and most frequent usage is used today in Bluetooth, Wi-Fi, cell phones and other wireless communications. Not only does the frequency “hopping” technique keep communications secure, but also allows for multiple signals to be sent without interruption.